Over 200 South Jersey & Philadelphia area-based participants will unite at Virtua Hospital for the 9thAnnual Victorious 5K Run/Walk on May 21, 2017, to benefit hospitalized children battling cancer & other life-threatening illnesses. 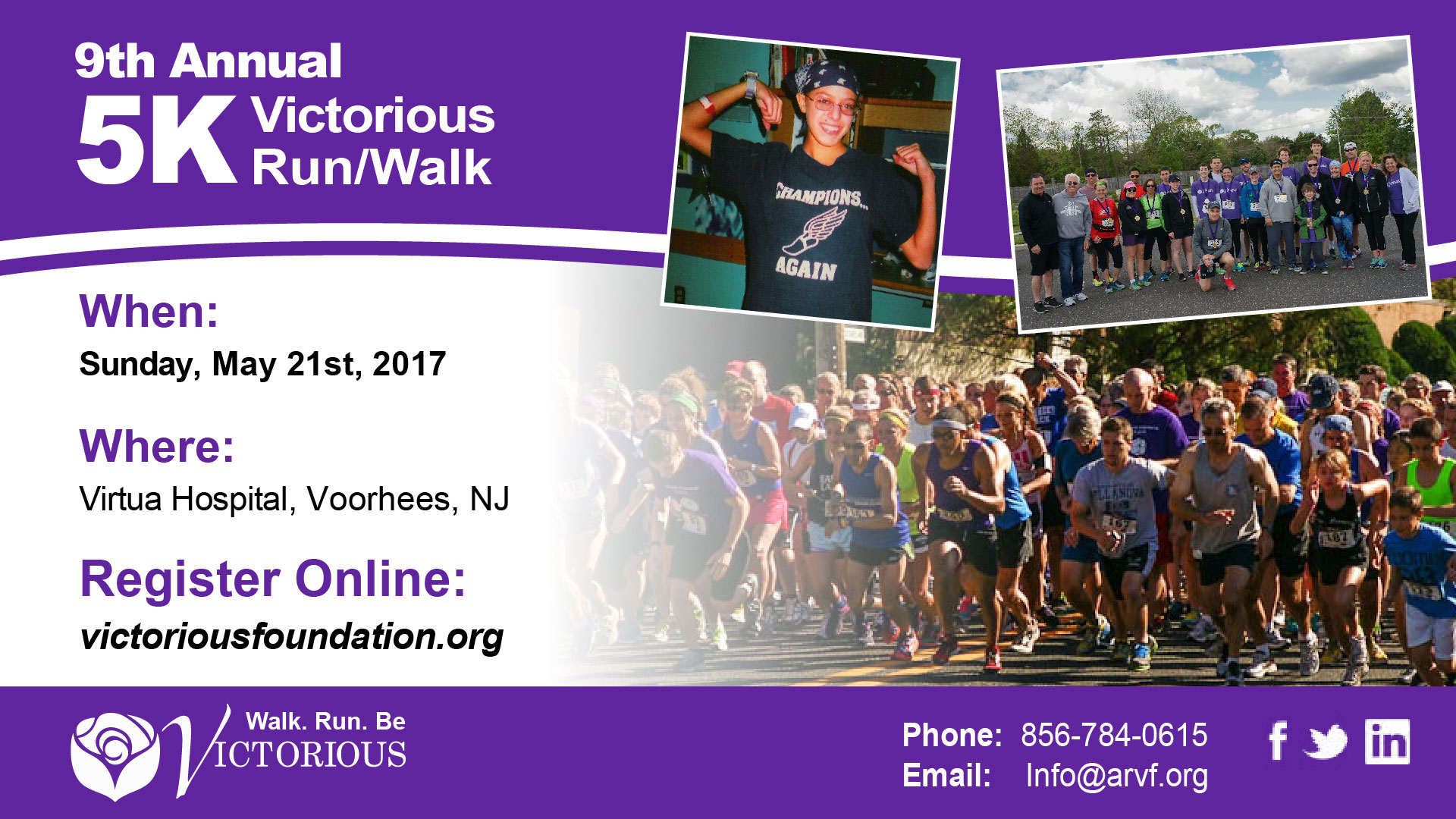 The 9th Annual Victorious 5K Run/Walk will host over 200 South Jersey & Philadelphia area-based participants at Virtua Hospital on Sunday, May 21st.  The event, organized by the Alicia Rose Victorious Foundation (ARVF), will help benefit hospitalized children battling cancer & other life-threatening illnesses.
ARVF, located in the Voorhees Town Center, was co-founded by Mario & Gisele DiNatale in 2002 after the passing of their 16-year-old daughter. The foundation’s mission is to improve and enhance psychological needs of hospitalized teens across the country by providing programs and activities specifically designed to enhance their quality of life while receiving treatment. Through various fundraising efforts, grants, and events, such as the Victorious 5K, these programs are made possible.
Since its first year in 2008, over 3,000 supporters have participated in the Victorious 5K by either doing the 5K run or 1-mile walk. “We wanted to give families and kids a chance to get involved and thought this would be a great opportunity,” DiNatale’s said. With over 200 participants and 30 volunteers at this year’s race, “the community has most definitely stepped up and shown its continuing support and recognition of the unique population of adolescents in children’s hospitals.”
“I run to support a great foundation that’s doing amazing things for teens,” said Sean Murphy, avid runner and 3-time Victorious 5K race participant. “The Teen Lounges they fund have an immediate impact on the daily lives of the kids, which is great to see.”
"Being a Field Marshall for the 5K is extremely rewarding,” said Sam Taufer, Senior at Eastern Regional High School. “Cheering on and giving high fives to all of the runners is such a nice feeling knowing that we are all there for such a great cause. The smiles on everyone's faces are unforgettable."
Kimberly Dickstein, Haddonfield Memorial High School teacher, stated "Every year I run with a team of my students and colleagues, and it is a constant reminder that the Victorious Foundation is for teens by teens in every possible way.”
Top 5K race finishers in various age groups will be awarded medals and prizes, with additional awards to Top Overall and Team Captain with the most participants. Special guest appearances from Voorhees native Ali Gorman, R.N. & Health Watch Reporter, Channel 6abc, as well as morning warm-ups lead by the Phillie Phanatic.
EVENT INFORMATION
·         www.victoriousfoundation.org/5k
·         Time: Sunday, May 21st, 2017; 8:30am – 12pm
·         Location: Virtua Hospital, 200 Bowman Drive, Voorhees, NJ 08043