Over the past nine years, the Alicia Rose Victorious Foundation in Voorhees has received several checks thanks to a charity summer hockey tournament. 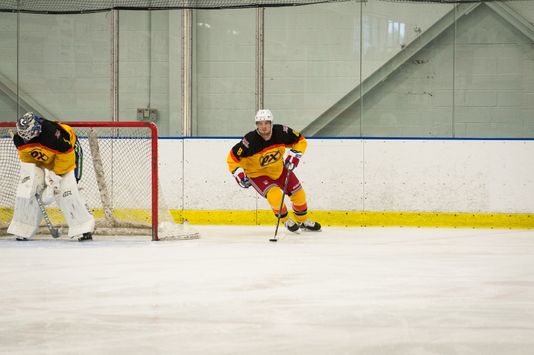 The organization started in 2002 as a 501(c)(3) non-profit in memory of Alicia Rose DiNatale, who died in October of that year following a 13-month battle with Adenocarcinoma. She was only 17 years old, a member of the soccer and track teams at Eastern Regional High School as well as part of the drama club.

Anthony Orner grew up with DiNatale and started his own team in the Checking for Charity tournament, which will hold its 10th installment in South Jersey this weekend.

“When it came to deciding on a charity it was like a no-brainer,” said Orner, now 32 and playing for a seventh time. “There were four or five guys on the team the first year that I grew up with, so they had known Alicia as well. We tried to keep it close to home.”

The team registration fees, donations, proceeds from merchandise sales and concessions all gets put into the pot and the money is given back to the charities depending on how well that team performs in the tournament. All of the charities represented by teams are guaranteed at least some financial contribution.

Since 2010 ARVF has received more than $11,000 from Checking for Charity, according to executive director and co-founder Gisele DiNatale, Alicia’s mother. Those funds, she said, went to “Victorious 4 Teens” programs for children in the area.

Orner works for a pharmacy that services hospices, so he was doubly hit home by the ARVF. Since its inception the organization has raised more than $2.5 million for “Victorious 4 Teens” lounges, enhancements and activities in hospitals.

More than 70,000 children have been reached across the country through the foundation’s programs or “teen kits,” which include items intended to provide care and comfort to teenagers battling cancer or other life-threatening illnesses.

“Throughout high school and after high school they had put together some catering events and some galas, runs, things of that sort,” Orner said, “So we were always reminded and always a part of the foundation events growing up. It was always something that was on our minds and something that we believed in. Their (mission) is really a good one.

As the tournament has expanded, so have the number of charities reached, including causes inspired by locals. For instance, the team Ebo Strong, which features ex-Flyer Justin Williams and Voorhees native Cayden Primeau, benefits a foundation in memory of Steven Eric Eberling, a Lenape High School student who died five years ago at age 17 after a two-year battle with bone cancer that started in his femur.

This year Checking for Charity will have 48 teams across six divisions. Games will be played at the Flyers Skate Zones in Voorhees and Pennsauken as well as the Igloo in Mount Laurel. The level of competition has grown also. Orner used to play in the A division, but, “it’s basically just professionals now.”

Sewell native Tony DeAngelo is one of them and the latest to start his own squad. A first-round pick in the 2014 NHL draft, DeAngelo, a defenseman for the New York Rangers, has chosen to represent the Wounded Warrior Project.

“Wounded Warriors was my choice from the beginning and then I found a couple people that run the organization out of New York and I was able to hook up with them a little bit to make sure I’m able to give back to the city where I play,” DeAngelo said. “They’ve been really good to me, so I got all my guys t-shirts and hats and it’s gonna be nice to play for them.”

In addition to paying the team’s registration fees, DeAngelo started a GoFundMe page so that fans could donate to the Wounded Warrior Project also. Being involved in the tournament has inspired him to keep giving back once the NHL season kicks into gear.

“Once I started doing it I really liked the idea: your goals, assists, points, team wins, each thing has a (corresponding) money you’re gonna donate and as the season plays out — say it’s $50 per goal or assist, whatever it is, you tally it up at the end of the year and donate it and hopefully have some of them out to some games this year,” DeAngelo said. “We’re trying to start a big thing and be with them. I’m looking forward to it.”