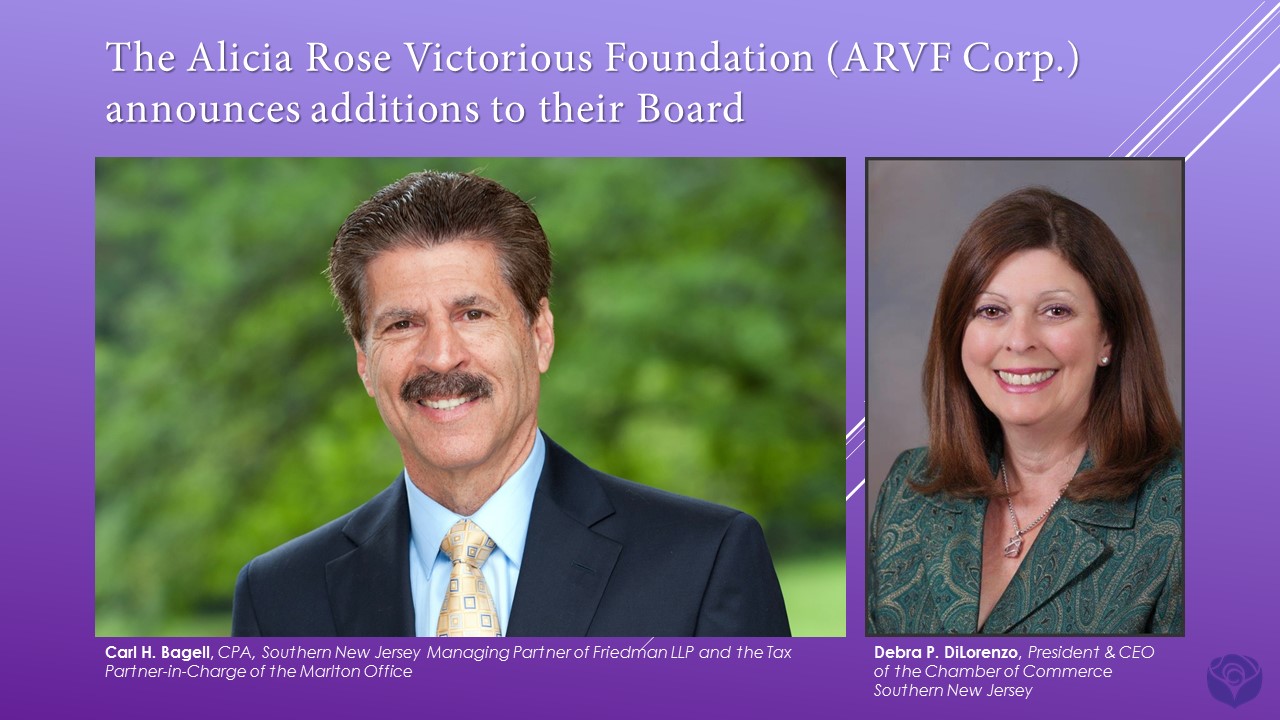 The Alicia Rose Victorious Foundation (ARVF Corp.) announces additions to their Board

Carl H. Bagell, CPA of Marlton, NJ has been appointed to the Board of Trustees of the Alicia Rose Victorious Foundation (ARVF, Corp.). Bagell is the Southern New Jersey Managing Partner of Friedman LLP and the Tax Partner-in-Charge of the Marlton Office. With over 40 years of public accounting experience, and a concentration in taxation, he has extensive experience in the negotiation and settlement of federal, state, and local tax audits and controversies, as well as auditing, accounting, estate and trust planning. Bagell holds Certified Public Accountant licenses in the State of NJ and Commonwealth of Pennsylvania. He is also licensed by the State of New Jersey Department of Banking and Insurance. His affiliations include: Sigma Alpha Rho Fraternity Alumni Association & Judicial Tribunal; Alicia Rose Victorious Foundation Business Advisory Board; Friends of Jewish Senior Housing Board; and a Board Member of the Community Foundation of South Jersey.

Debra P. DiLorenzo of Longport, NJ has been appointed to the Board of Advisors of the Alicia Rose Victorious Foundation (ARVF, Corp.). DiLorenzo has served as President & CEO of the Chamber of Commerce Southern New Jersey since 1994.  During that time, the Chamber has been named the “Best Chamber” in the State by NJBIZ because of its progressive Program and Work and commitment to its members.  Additionally, the Chamber has become the first and only Chamber in the USA to have earned ISO 9001: 2008 Certification, an international quality management system designed to help organizations ensure they meet the needs of their customers.  Debra and her team work tirelessly to serve the Chamber’s members by providing them with (1) opportunities to meet and do business; (2) resources to enhance their position in the marketplace; and (3) a collective voice on public policy affecting operations and profitability.  In 2009, Debra was appointed by Governor-elect Chris Christie to his 10 person Transition Team, and chaired the Department of Labor Subcommittee.  The Governor appointed her to the Casino Reinvestment Development Authority in 2011 and reappointed her again in 2013 and 2017.

Prior to her current position, Debra was Senior Vice President, Government Relations at New Jersey Business and Industry Association, where she directed the association’s lobbying team from 1990—1994.  And before that, Debra held various management positions at South Jersey Gas Company from 1979—1990, including Vice President, External Relations.

Debra earned her B.A. and M.A. in Communications from Rowan University, serves on regional and Statewide Boards and has received numerous awards including as Rowan University’s Distinguished Alumnus; Woman of Distinction—Girl Scouts of America, Camden County Council; Rutgers University Walter Rand Institute’s South Jerseyan of the Year; and NJBIZ’s Top 50 Women in Business.