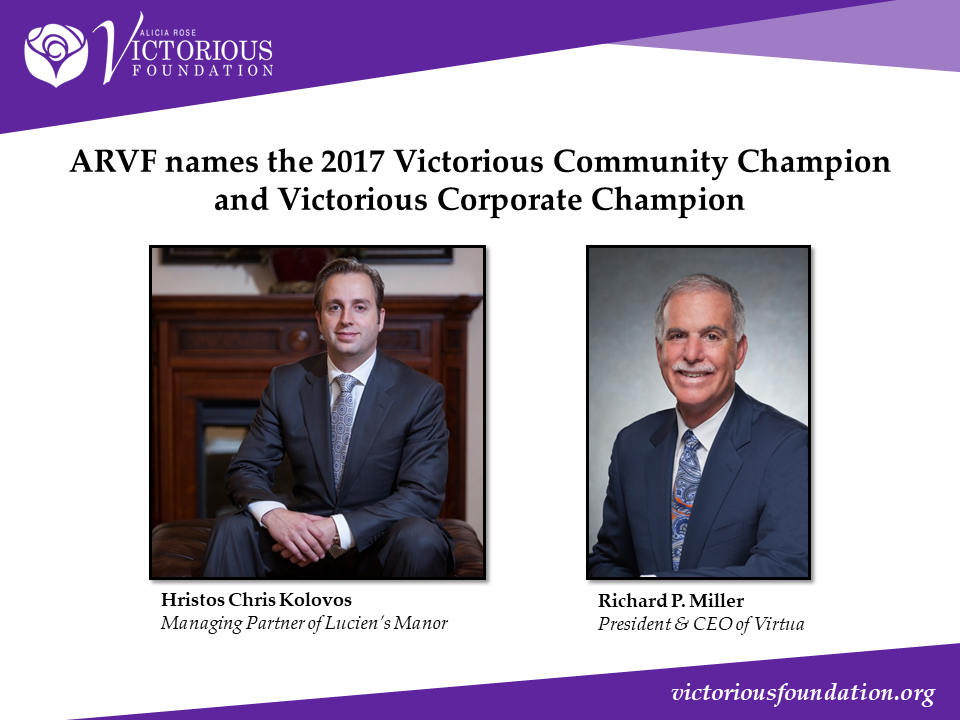 VOORHEES, NJ – Alicia Rose Victorious Foundation (ARVF) has named Hristos Chris Kolovos and Richard P. Miller as their 2017 Victorious Community and Corporate Champions, respectively. Both will be honored at the Foundation’s 15th Anniversary Birthday Bash, The Crystal Ball. The celebration will be held on October 27th, 2017, at Lucien’s Manor, Berlin, NJ. The Annual Birthday Bash has been a South Jersey signature event raising funds to support various Victorious 4 Teens programs for hospitalized children with cancer and other life-threatening illnesses.

Hristos Chris Kolovos is the Managing Partner of Lucien’s Manor, a premier catering facility located in Berlin, New Jersey. He is also the managing partner of The Colonial Diner in Woodbury, New Jersey.

Kolovos grew up in and has lived throughout central and southern New Jersey.  A graduate of Eastern High School in Voorhees, he obtained his Bachelor’s Degree in Business Administration from American University in Washington, D.C. in 2001.

Kolovos has spent his entire life working in the hospitality industry, starting throughout his childhood with his parents in restaurant and diner settings. His parents, Vasilios and Angela Kolovos, both migrated to the United States from Greece in the 60’s. Kolovos’ parents worked tirelessly through the ranks in the restaurant industry until they were able to buy their own establishments.  One of those establishments was Lucien’s Old Tavern in Berlin.  At the time, Kolovos was ten years old and learned quickly to help any way he could.  From checking coats, bussing tables, to washing dishes, Kolovos spent many of his formative years learning what it takes to run a restaurant. After graduating from college, Kolovos came back to Lucien’s to help run the family business and became a partner in 2003.

Kolovos’ passion and innovation for the hospitality industry has made him an industry leader. While helping grow the business to one of the premier catering facilities in New Jersey, Kolovos helped orchestrate multi-million dollar renovations to the facility and became proficient in development, design, and construction. Kolovos has acquired and developed multiple projects throughout the East Coast, and internationally.

Kolovos serves on the Board of Portones Del Mar, S. A., a Panamanian development company building a residential community and marina just south of the Panama Canal. He is also the Vice President of the Downtown Berlin Revitalization Committee, focusing on growing the Main Street and the town of Berlin, NJ. Kolovos hosts and helps to create awareness and funding for non-profits in the community. Among his recognitions, Kolovos was honored as a recipient of the 40 under 40 award by SNJ Business People, and the 20 under 40 by South Jersey Biz Magazine for his hard work in the South Jersey Business community.

Since 1998, Richard P. Miller has served as president and CEO of Virtua, a non-profit healthcare system offering a full continuum of primary, preventative, wellness, acute and long-term care.

Miller has led Virtua in innovative directions by creating a values-based culture defined by the "Star Initiative," adopting Six Sigma and transforming a group of community-based hospitals into technologically advanced regional medical centers. In addition to an enterprise alliance with GE Healthcare, Virtua has formed clinical alliances with nationally renowned organizations such as Penn Medicine and The Children’s Hospital of Philadelphia (CHOP).

Among his recognitions, Miller was honored with the New Jersey Hospital Association’s 2017 Distinguished Service Award. He was named Human Resources CEO of the Year by the HR Department of the Year Awards. He received the CEO IT Achievement Award from Modern Healthcare magazine, was named Healthcare CEO of the Year by the Philadelphia Business Journal, Lean Six Sigma National CEO of the Year, Distinguished Citizen of the Year by the Boy Scouts of America, and received the New Jersey Business Hall of Fame Lifetime Achievement Award from New Jersey Junior Achievement. Goodwill honored him with the Helms Award for spreading goodwill through leadership and philanthropic involvement. He has been named among The 100 Most Powerful People in New Jersey Business by NJBIZ magazine, one of the 50 Most Powerful People in Health Care by NJBIZ, a "Person to Watch" by Philadelphia Magazine, and recognized nationally on the list of “291 Hospital and Health System Leaders to Know” by Becker’s Hospital Review.

Alicia Rose Victorious Foundation (ARVF, Corp.) is a 501(c)3 non-profit charitable organization located in Voorhees, NJ. ARVF provides adolescent programs, and activities to enhance the quality of life for hospitalized teens battling cancer and other life-threatening illnesses. Since 2002, Victorious 4 Teens programs have helped more than 75,000 critically ill teens and their families during hospitalization. The Foundation has raised over $2 million funding 63 Teen Lounges, where young teen patients can hang out, watch movies, listen to music, play video games, and/or use computers. ARVF has also distributed over 16,000 Teen Kits & Bandana Pillows to hospitalized teens, supplied mobile Arts & Crafts Carts, and hosted Proms in children’s hospitals. For more information about ARVF and to find out how you can help hospitalized teens, visit www.victoriousfoundation.org.